In 2007, the Shade Tree Committee worked with the City of Geneva to conduct an analysis of the street trees using the USDA Forest Service's i-Tree Streets. A random 6% sample of City blocksides was inventoried, from which the software created estimates with an acceptable error. Here are some of the more useful:

It is estimated that the City of Geneva has about 3,800 street trees.

Almost half of the street trees are Norway maples. The following pie chart shows the percentage of other species in the top 10:

Age is estimated by tree diameter, and many species increase about 1-inch in diameter every three years. As the graph below demonstrates, the oldest common species are the silver maples and the red oaks. The average age of the street tree population is about 50 years. 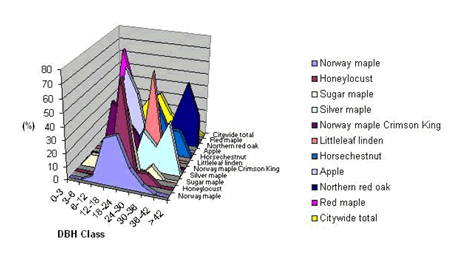 Half of the City's street trees were found to be in good condition, and another 40% in fair condition. Three % were estimated to be dead or dying at the time, and most of those have been removed since the analysis was carried out.

Using the best available science, we can estimate that Geneva's street trees deliver about $475,000 per year in environmental benefits. These benefits include:

Using the annual benefits and city expenditures, we estimate that the City's street trees return about $9 to the community for every $1 invested.